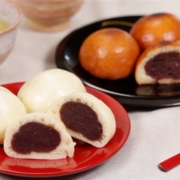 It is a sort of steamed cake or steamed dumpling in sweet flavors. It is a dessert that is very unique and amazing in flavor. It is a very light and low calories dessert. The cooking method is steaming for cooking the dough and bean paste. It is also known as Japanese Confession cuisine, WAGASHI. This is a steamed wheat flour dough filled with sweet red bean paste. It is very nice and full of nutrition. It goes very well with the green tea. It is served as a dessert, snack and in lunch boxes for school. It is sold in the small shops as candy or a sweet for kids. It is very common in Japanese stores.

Wagashi is the Japanese confession meal that is traditionally served with green tea. The word Kashi refers to the SWEETNESS, so this dish is introduced that is more towards the Japanese tradition. Wagashi is made up and serves as a gift for festivals, to admire the Tradition of Japan. It is even cooked on the Japanese new year. This dish is more like a vegan dish having a sweetened beans paste filled into flour dough or either sticky rice. They are so colorful that can please the mind.

It is specially made up of Plant’s based ingredients, like :

There are so many different types of Japanese confession dishes are cooked and admired by the people. They are based on the Moisture content in the specific dish.

NAMAGESHI : It is a wet confectionary of about 30% or more moisture into the Japanese wagashi.

HAN- NAMAGESHI : It is said to be half-wet confectionary. This is 10 to 15% of the moisture into the wagashi dish.

HIGASHI : It is dry confectionary, about less than 8% of moisture content.

Manju is made up of different main ingredient that is filled with the different fillings. We can make it by using different options of making the outer cover. The outer coating is usually thick that can hold the filling into the Manju layer.

Following are the ingredients by which Manju is cooked.

Usually, white flour is also known as plain flour or it is mixed with corn starch. In this dish, white flour is mixed with the corn starch and then used to cook the outer cover for the Manju. The dough made should be tough that can hold the filling inside while cooking in steam. This is more like Momos, or dumplings. It is not wrong if you called this dish by the name sweet dumplings. But because of the tradition of Japanese confession, Wagashi we called this dish by a different name.

Buckwheat is a plant cultivated for its grains. These grains can make flour and used in different Japanese dishes. This buckwheat flour is used in making Manju with a different variety and taste. These seeds and grains are used as cereals.

Rice flour is also very commonly used in making this Manju. This tastes more like a rice cake if you are using rice flour to make this steamed Manju.

Adzuki or red beans paste/jam is the old traditional filling of Wagashi. This is the main authentic filling made of using red beans paste to fill the Manju and steam them in a form of a ball. This red beans paste is also known as Anko in Japan. Azuki beans also have much other variety of color and slightly different in taste like red beans, white beans, black beans, etc.

This paste is prepared by boiling the beans into the water until softened, then grind them to form a paste-like texture. When this paste is left for a while it turned sweet. This is dark red in color with a smooth and homogenous consistency. The grinding of the beans must be smooth to make a thick unanimous texture of the paste.

Tsubuan paste is also made up of red beans but it has a different texture and flavor. We also called this tsubuan paste red beans jam or tsubuan jam. In this paste, we add white sugar and honey to make it sweet enough. It has chunky consistency like a marmalade. Beans are cooked then mashed by spoon or fork to make it like a chunky paste.

Matcha is a fine powder of green tea leaves. It is also known as green tea powder or matcha. Green tea flavored filling is added into the Outer bun made up of plain flour dough. It is the very unique flavor of Manju that can make this look green from the inside. This flavor is not usually loved by many people but still, some people cook, bought and eat this flavored Manju.

This filling is made by adding matcha powder to the sugar and made a thick paste-like texture that can hold the shape and filled properly into the Manju bun.

Momiji Manju is made up of Buckwheat flour and it is shaped into a maple leaf-like shape. It is very common in Japanese confession, wagashi. It is served after confession, during festivals, and on Japanese new year’s eve.

This buckwheat outer layer is filled with the red beans sweet paste and then steamed to cook and serve.

This bun of Manju is made up of rice flour and grated sweet potatoes filled with red beans paste. The colors are added to the bun topping to make it resembled to the white yam 和 purple yam.

OTHER DIFFERENT VARIETIES ARE :

INGREDIENTS OF THE RECIPE 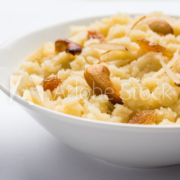 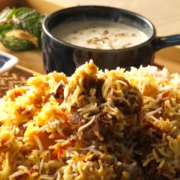 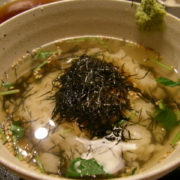 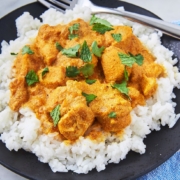 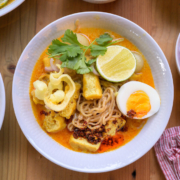 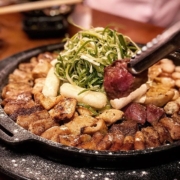