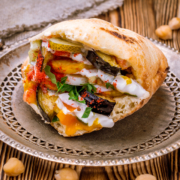 This dish is like a sandwich in which different vegetables, stuffed meat, sauces are served in the pita bread or some other form of bread. In this specific bread fried eggplant, hard-boiled eggs, salads, different sauces are sandwiched between pita bread or laffa bread. Their ingredients are basically from the Jews breakfast and it is also a dish of breakfast. The use of Tahini sauce 和 Amba pickle is also very common but it is the variety infused with UAE culture. Tahini sauce is basically a sauce from Arab and Emirati cuisine so it is a dish with different culture infusion. This dish is a breakfast meal for Jews but it is commonly found there as the street food sandwich and also in the snacks. The history of Israeli cuisine is divided into different eras of development.

Israeli cuisine, Middle Eastern cuisine, 和 Arab cuisine have the same roots of origin because these cuisines share the same ingredients and also cooking styles. There is a huge list of food meals cooked in Israeli cuisine based on the use of ingredients and time of meals taken like breakfast, lunch, dinner, etc. In Israeli breakfast and also in lunch and dinner dishes, eggplant is very common like there are eggplant salads, sandwiches, sauces, etc.

Israel’s culinary culture is the history of 3000 years. The tradition of this culture is influenced by regions like Asia, Africa, the Middle East, and Europe. The kings of the Israeli Kingdom have a great impact on culinary culture and Israeli cuisine.

The era of Romans and Hellenistic were influenced by Jerusalem and Priests. Meals of that time usually have alcoholic drinks, meat, fresh vegetables, olives, and sweet fruits.

There were seven spices common in Ancient food of Israel like

Now there is a Modern trend that followed the world mostly the Western side. But the roots are traditional when it comes to the Ancient food and dishes of Old culinary culture. There are new kinds of fruits and vegetables from which different dishes are cooked with modern style.

The old Yishuv is the era which has begun in 1881 and was influenced by the Sephardi cuisine of Jews.

Kibbutz means “gathering or clustering”. The first kibbutz was established in 1909 known as DEGANIA. Different members of a kibbutz are called kibbutznik. Their meal consist of different variety of food :

There are different aspects of the name of this dish SABICH.

One of the theories is the name of the dish is based on the name of man, Sabich Tsvi Halabi. There is a story of a Jewish man born in Iran and created this dish based on the culture of Israel. This is the story but it has no link with Israeli cuisine but this dish is also common and cooked in Iran.

There is no more story of this name that is sabich is a short-form of the Hebrew words “Salat, Beitsa, Yoter Ḥatsil” that means salad, egg, more eggplant. These are the main ingredients of the dish so they called this dish named, SABICH.

At the time of 1940 to 1950, there were Iraqi Jews refugee created these dishes. There is the creation of these sandwiches because, in the morning, they had no time for breakfast. They used to have bread and add whatever they found in their refrigerator like boiled eggs, vegetables, and cooked eggplant. Eggplant is the must element in their sandwich.

With the time they used to love this dish and prepare different stuffing a day before for breakfast like boiled potatoes, boiled eggs, eggplant. In Israel, these dishes became popular as fast food and breakfast as well. The dish is said to first be sold in Israel in 1961 in Uziel Street as street food. With the different variations, this dish has established different names and different concepts. One of the same dishes is named SABICH SQUARE after the shape of the sandwich.

This dish is popular in different regions and other cuisines :

ELEMENT OF THE DISH

In Sabich sandwich we have two bread options

Pita bread is also known as Arabic or Syrian bread. This is a type of flatbread that is usually served as the bread for a sabich sandwich. This is straight or flatbread like a chapati. It is a yeast-leavened bread. In Arab, it is also known as Khubz.

This bread has a history from 14,500 years ago from the Stone-age, where pita-like flatbreads cooked in a tinûru. They are cooked and presented in such a way that a two-layer of pita bread formed like a pocket pita. In Greek Language, pita is known as bread, cake, and pie.

Laffa bread is Iraqi Pitta bread. It is a large flatbread with a thin crust. It is cooked in tandoor. But it has not formed any pocket because it is not fermented by the yeast. This is used as the sandwich in which the material is rolled in the bread like a roll or shawarma.

There are different methods of preparing laffa bread

There are different names of Israeli salad

Amba is the Mango pickle used in Israeli cuisine as the condiment for different dishes. It is very popular in Iraqi Jewish and Israeli cuisine. In this dish, green mangoes are used as the main ingredient.

The main ingredients of Amba sauce or Amba pickle are

Tahini is a very popular and commonly used condiment or sauce in different dishes of the Middle east. This is the sauce from Middle Eastern cuisine. It is served as the sauce, dip, and prepared by Hulled Sesame seeds.

Tahini means to Grind. Tahini word is included in many languages and has its own meaning. There are many different methods to prepared tahini sauce. Like different ingredients are also added to this dip. Sesame seeds are first soaked in water then roast in the oven, blend in the mixture with other complementary ingredients like olive oil, salt, chili if required.

There is also different flavored tahini sauces sold in markets with additional ingredients and flavors.

Hummus is the chickpea dip that is usually a savory dip. This is very rich in flavors and has very rich in good healthy nutrients. As a snack, it is served with pita bread.

There are different types of spices added in making these sandwiches where you can adjust the taste and flavor of your own sandwich.

There are some spices that are commonly used in Israeli dishes like : 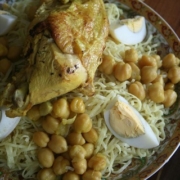 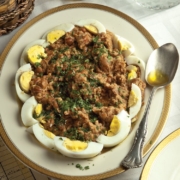 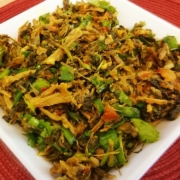 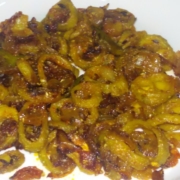 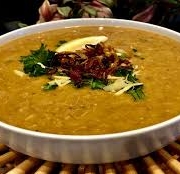 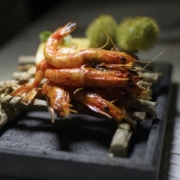