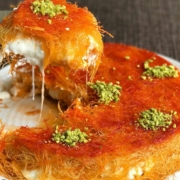 Knafeh is a delicious Cheese pastry dish. This is a pastry soaked in sweet syrup and layered with cheese and semolina. This is cooked by roasting and served as the juicy sweet treat of the day. This has a crispy crust of cheese softened by adding sweet syrup over it and different dry nuts are added over this mostly, pistachio. The combination of totally different ingredients makes it a unique dish like cheese and sugar together. But in this dish, the combination is best. Like any dessert, the use of butter, milk, flour, nuts, semolina, with the twist of cheese layering. We can get a cheese pull and it tastes amazing.

This is popular in the Middle East and Even throughout the world because of its popularity. The rose syrup with nuts is like a traditional Arabic dessert. Different flavoring is also added to make it one specified dessert, like Pistachio Knafeh, Almond knafeh, Rose knafeh, etc. Clotted cream is also added over the layering for more richness.

There are different combinations of varieties in different regions. It is usually called Palestine dessert but included in many other Asian and Middle Eastern cuisines.

There are different names of Knafeh depends on the side ingredients used in it :

Other names depends on the texture and main ingredients :

KNAFEH INCLUDED IN OTHER CUISINES

In the Arabic language, this is called كنافة, or knāfa.

In the Coptic Egyptian language, the word kenephiten means ”bread or cake”

Names like kanafeh, kenafeh, knafeh, kunafah, kunafeh, konafa, kunafa, are English Language words and commonly used to name this dish unlike other names in Turkish or Arabic languages.

There is an ancient story of Knafeh, from the Fatimid Egyptian Empire or Umayyad Caliphate. In the 10th century, Kitab al-Tabikh (Book of Dishes), has all the ancient dishes from Middle East and the Arabic world and it also has Turkish dishes recipes and the traditional recipe for Knafeh.

In the 10th century, Kitab al-Tabikh (Book of Dishes), the chapter of Dessert related to qatāyif, this recipe of the dish was written. The writer called this dish the CREPE and the use of honey, nuts, fried dough, and cheese stuffed.

In the 13th century, Kitab al tabikh fi-l-Maghrib wa-l-Andalus was the book also has the information of this ancient dish, Knafeh. The writer called this knafeh is made thinner, “like a fine paper”. Baked and fresh cheese is added with rose syrup and honey.

Modern knafeh is fried with butter and toppings such as almonds, pistachio, sweetened cheese, clotted cream, and after frying it is topped with a mixture of rosewater and sugar.

In Greece, this is the dish used to be called by the name, KADAIF. Like καταΐφι (kataïfi) and κανταΐφι (kadaïfi) names in the Greek language. This is the type of sweet pastry dessert in which thin and fine threads like appearance. It is dipped into the sweet syrup and looks similar to the bird’s nest.

In this dish, the layering in the pastry is filled by adding different nuts. Nuts can be mixed dried fruits and only one like pistachio and almonds, etc. Like the layering of the Baklawa.

This dish is similar to the Baklawa and also to Knafeh. Like Baklawa the nuts layering is done but it is dipped into the sugar syrup like Knafeh. This dish is like a combination of these two separate dishes.

In Turkey, there are many similar dishes but their names are different by their features.

This is named after the city of Palestine, Nablus. It is made by :

FOOD ITEMS ADDED TO THIS DISH

Almost all the dry nuts, dried fruits, and soft fruits are added to this dish for more flavors and crunch.

To add prominent flavors, these ingredients are added in the sugar-sweet syrup

Garnish this dish with :

This is the knafeh prepared with NOODLES.

This is cooked by using two ingredients as the main components :

This is prepared with Semolina dough and sugar syrup

TYPES OF CHEESE USED IN THIS DISH 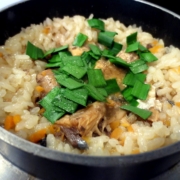 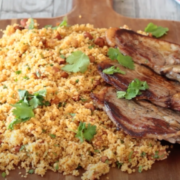 Cameroon – How to cook Epudi leaves
Scroll to top